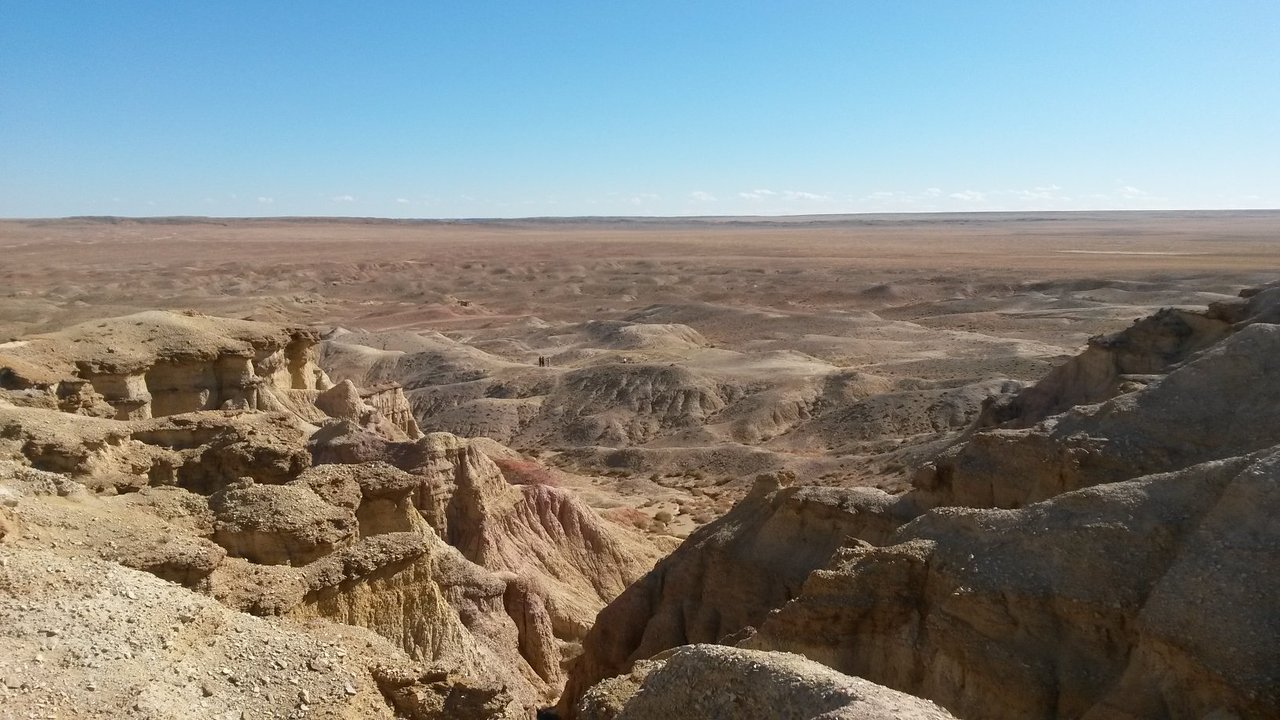 Mongolia is famous for the beauty of nature, its virgin purity, and boundless open spaces. The country’s greatest natural attraction is the Gobi Desert, which envelops Mongolia with a sandy arc from the Altai and Tien Shan mountains along the border with China to the Nanshan and Altıntag mountains and the Yellow River. The Gobi is amazing in its size: its area is 1.5 million square km, and in these vast expanses there are many interesting things.

The population density here is approximately 0.28 people per square kilometer. That is, you will calmly drive a couple of hundred kilometers without meeting a single settlement. At the same time, many small villages will be marked on the map, most of which turn out to be migratory camps in two or three yurts.

Translated from the Mongolian name of the desert means “waterless place.” Over the 65 million years of the Gobi’s existence, practically nothing has changed here, except that the wind, shifting the sand dunes in a grain, extracts the fossilized bones of ancient dinosaurs to the surface.

The remains of prehistoric dinosaurs were found in the Gobi desert at the beginning of the 20th century by scientists from the American Museum of Natural History, who was looking for evidence of the theory that Central Asia is the cradle of human civilization. The fossilized bones, dinosaur eggs, and their nests helped to make many discoveries about how these ancient dinosaurs lived and how they raised their offspring.

Mongolians have a division of the Gobi Desert into 33 sectors, although it is difficult for a person not familiar with it to understand and imagine. 33 small deserts inside one huge Gobi differ in structure types, types of vegetation and colors: there are flowering steppe plains, picturesque cliffs, clay, and stony hammads, vast hollows, saxaul groves, rare oases, salt marshes, and other diverse landscapes.

One of the most amazing deserts in the world, the Gobi is painted and fashioned by the forces of nature from transparent yellow sands, salt marshes and rocks, vibrating red-hot air, and a buzz of silence. In fact, the sandy part of the Gobi accounts for only 3% of the entire desert, the rest of its expanses show unique landscapes of clay and stone, mesmerizing landscapes, where many animals and plants also live. Black-tailed gazelles and goblin brown bears, wolves, saigas, and camels live in different places of the desert – all of them managed to adapt to a difficult life in the vast expanses of the desert. In the Gobi, there are also a few existing mountain rams, kulans, sirens, and gazelles that exist in the world.

Timely departure for the first acquaintance with the capital of Mongolia: a geography museum with full skeletons of two dinosaurs from the Gobi desert. A visit to the Chojin Lama Monastery (Museum of Religion), with one of the best collection of Buddhist icons, and ritual masks of Tsam in the country. Under the ceiling of the main temple, sometimes eerily painted animal skins and human skin are hung up to dry. Walk along the central square of Sukhbaatar and visit the memorial complex of Genghis Khan. Return to the hotel.

After breakfast, you advance to the place where the ancient capital of the “Great Mughals”, Karakoram, once founded, was founded by the great Genghis Khan in the 13th century. You will arrive in Kharkhorin – a small town in the valley of the Orkhon River. Here, in the vicinity of the city, are the ruins of the Karakorum, which for a short time under Ogedei Khan was the capital of the Mongol Empire and an important outpost on the Silk Road.

After breakfast, you will continue to Ongiin Hyde or Ongi Monastery. The landscape is gradually changing: it becomes more arid and the proximity of the Gobi desert is felt more and more …
A monastery was built in the 18th century, over 1000 lamas and novices lived here, at the monastery, there were immediately 28 churches. The monastery taught philosophy, tantra, mathematics, and Tibetan medicine. But during the socialist rule it was almost completely destroyed and still the local sands in their depths keep sacred texts, sculptures, and monastic utensils.

After breakfast, you move more and more south to the famous Gobi Desert. Acquaintance with it will begin with a bright place described in many novels and scientific studies – the Bayanzag place, which is also called Ulaan Ereg or the Flaming Cliffs for the incredibly red color of sandstone in these parts. People settled here from ancient times, but paleontological finds brought fame to the place – for example, huge accumulations of fragments of dinosaur bones, fossilized eggs, and trees, which are about 65 million years old.

After breakfast, moving southwest through the mountains, you will arrive at the sands of Hongor or Hongoryn Els. The dunes are located in the northern part of the Gobi Gurvan Saikhan National Park (Three Gobian Beauties), at the border of the Sevray and Zeelan mountains. The noise of the wind in the mountains can be heard from a long distance, and it is this sound, with its melodic harmony, covering two hundred meter sand dunes, that gave the name to the sands as “singing dunes of Hongor.”

After breakfast, you will go to the Gobi Gurvan Saikhan National Forest Park – the largest national park in Mongolia, which means “Three Beauties”. The park includes several mountain ranges and a sand spit, and at the foot of the dunes there flows a stream, which in some places forms a deep gorge. – Yolyn Am. This place is also called the Lamb’s Fall – a huge cleft with sheer cliffs, which was formed as a result of a powerful earthquake that split the mountain in two.

In the rocky labyrinths of Baga Gazryn Chuluu, you can see the petroglyphs left by hermit monks living here in the 19th century. And here there is an underground healing spring, the water of which, according to local residents, cures eye diseases and even blindness. A narrow hole was cut in the rock, giving access to healing water, and an ancient shamanistic sanctuary was built. Nearby are burial mounds of the mysterious Hunnu people who roamed the steppes and deserts from China to northern Mongolia. Animals here you can see the steppe wolf, Pallas, mountain goats, marmots, vultures, eagles, and hawks. 20 species of medicinal plants grow here.

After breakfast, return to Ulaanbaatar.
Upon arrival, lunch at the restaurant. Free time.
In the evening, a concert of folklore, dinner and relaxation at the hotel.

The end of your Vacation in Mongolia.

THE BEST TIME TO VISIT

This tour is available from the end of May and the whole summer until the middle of September.

ALL OUR TOURS ARE FLEXIBLE ACCORDING TO YOUR WISHES!

There are only good reasons why you must choose our Mongolian Travel agency. It’s because we’re constantly looking for ways to make your vacation in Mongolia as unforgettable as possible, from the way we plan the trip to the authentic experiences you’ll enjoy while away. Those added touches include several that no Mongolia-based travel agency offers. We pride ourselves on our original thinking.

What do I expect to see in Mongolia

Why we are the best among other tour agencies?

To help achieve these core values, we closely monitor client satisfaction and are consistently seeking new ways to exceed our clients’ expectations.

You will know your personal travel consultant both by name and by face, as we make it a practice to greet our clients personally and go through the entire trip.

We have local knowledge

Since we began we’ve created unforgettable travel experiences all over Mongolia for thousands of clients from all over the world.

Our experienced travel experts have the resources at hand to make your dream holiday a reality. Why not contact us with your interests?

Let us do the work for you! By choosing our agent, you can save time and hassle by booking all of your itinerary services directly with a specialized local guide.

After booking a tour with us and later your plans have changed, your deposit is fully transferable and will be held for an unlimited time.