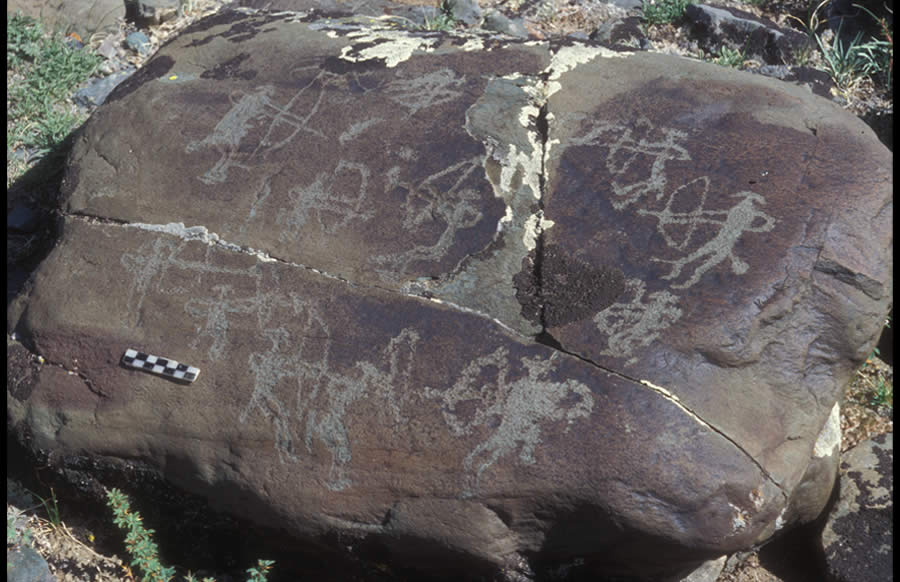 5000-3000 years ago, ancient people left us messages. The Rock Painting Monuments in Mongolia. Monuments allow us to read ancient history. The Earliest Rock Paintings depict wild beasts and birds. Time flows, their painting and drawing skills improve a lot. These works show us and send a message that different types of animals and plants live in this area, how people and animals eat the food. Such as hunting scenes, sowing, animal care, close the women and men relationship.

There are many places in Mongolia where you can locate petroglyphs:

Western Mongolia has The Rock Paintings of Tsagaan Salaa. That place became part of the Altai Tavan Bogd Park around 15 square kilometers and part of a larger Petroglyphic Complexes of the Mongolian Altai World Heritage Site along with The Upper Tsagaan Gol Complex. Tsagaan Salaam’s rock paintings have around 10000 paint in the southern part of the white river. They are important monuments of the art of shifting from the ancient hunter-gatherer community to cattle breeding and the beginning of the economy in Mongolia.

The cave locates at an altitude of 2100-2400 meters above sea level at 25 kilometers west of the Mankhan soum center of Khovd province in 1951. There are also historical monuments from over 40,000 years ago. The cave walls show us in the form of Ostriches, Turkeys, Cranes, Camels, mammoths, Buffalo, and Snakes. Paintings hit with a chisel and then painted with red dirt paint.

Rashaan Khad locates southeast of Mount Binder in Batshireet Sum (county), Khentii Aimag (Province of Mongolia). The surrounding area is full of cave paintings, various kinds of inscriptions, stone tools, and graves of the Bronze Age, the Iron Age as well as the Hun period. Besides them, there are also historical memorials belonging to the Bronze Age, the Khitan period, and the Mongol Empire.

The Del Uul is in the territory of Ulziit soum (County of Mongolia), Dundgobi province. Animal images have these Petroglyphs. As: Ibex, Horses riders, Camel, and anthropomorphic images are the most common.

The Bichigtiin Am Petroglyphs locates in Bichigtiin Am, Ikh Bayan mountain of Bayanlig soum, Bayankhongor province. That place was approximately 3000 years ago BC. The people had continued to add illustrations until the 8th-century CE. 1000 images of human beings, animals, and symbols.

Tsagaan Agui locates northeast of Bayanlig soum (county) of Bayankhongor province in southern Mongolia. This crystal cave is famous for its beauty and trace of ancient people. That Agui 700,000-800,000 years ago. Tsagaan Agui cave has protected by the Mongolian government.

Rashaan Khad place is the southeast end of Mount Binder in Batshireet Soum, Khentii Aimag. Hundreds of animal figures, stamp imprints, and inscriptions in various scripts all of which belong to the Paleolithic period or the Mesolithic period found on Rashaan Khad.

This place is at the western end of the great lake Khoton. Paintings included: argali sheep, horses, and other animals, this site are small but no less significant in terms of cultural heritage.

The Kalbak Tash is in Altai Republic Ongudaysky Rayon. There are 3,000 paints, engraved with stone and metal tools, showing images related to humans, animals, and the cosmos.